Who is Gazetted Officer For Annexure A – Before taking the signature of any government official, find out whether he is a Gazette officer or not.

Hello friends, in today’s article we are going to provide information about gazetted officer, when you want to verify a document from a gazette officer, then you should go to a government officer for verification.

When we make a new PAN card without PAN card correction or document, or when we apply for a new passport, then we need Annexure Form, in such a situation, we do not know, whose signature on this Annexure Form Get it done, if we get the signature of any government officer who is not actually a gazetted officer, then our Annexure A form for the purpose for which we submitted it will be rejected.

Who is Gazetted Officer For Annexure A

The list of all the gazetted officers in India is given below:-

The government has classified its employees into four categories for better understanding. Below is the list of all Gazetted officers in India whether they are from Level I, Level II, Level III, Level IV.

Gazetted Officer – Level A (I)

This level of employees is among the highest rank of employees. They are gazetted officers of the Highest level. They are placed in level 10 and above in Civilian and Defence Pay matrices. Pay Scale is not the only criterion for deciding the classes.

Government officers who come in Gazetted Officer – Group B

Non gazetted officer list – The basic difference between the gazetted and non-gazetted employees of the government is that the former can authorise the issuance of official government stamps whereas, the latter cannot. The Gazetted officers have a more administrative role.

➢ Gazetted Officer: An officer or public servant, who is appointed under the seal of the governor of the concerned state or by the president of India at national level, requires being listed in the Indian gazette or state government gazette to be considered a gazetted officer.

These officers are given the status of a gazetted officer by the government. And are vested with the duty of attesting a document as an original copy of the same for various applications. The list provided is not exhaustive and includes others also. The list provided only
includes the person covered in the brief.

How to Fill Annexure A Form For PAN Card

If there has been an object of applying Annexure A on your PAN card form and you had not given Annexure A while applying the PAN card correction form, now you want to upload the Annexure A by filling the form, then for that you can complete Annexure A properly. can be filled, there are some rules for this which are mentioned below

Click on CLICK HERE button to print Annexure A form PDF will open in front of you
You must have come to know above whose signature has to be done on Annexure A Form, “(Affix same
photograph as Affixed on PAN In the option “application form“, 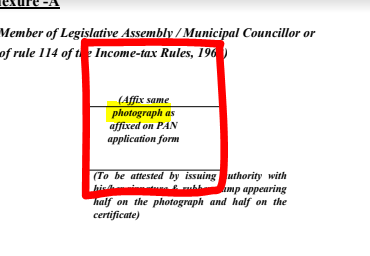 you have to paste a passport size photograph of the applicant given here while doing the PAN card correction, and get that photo verified by the Gaztted Officer.

“I hereby certify that I know Sh./Smt/Kum…….Your Name… ….
son/daughter of ……...Your Father Name…………and his/her personal particulars as given
below are correct to the best of my knowledge and belief. I recommend issue of PAN
card by the Income-tax Department to him/her.”
In the first option you have to enter the correct (new) name of the applicant, in the second option enter the correct (new) name of the applicant’s father.

Enter the applicant’s new name in the first name option,
the second Father’s name (even in case of married ladies father’s
name is to be provided) In the option Enter the new name of the father of the applicant,
Enter the new DOB of the applicant in the option containing Date of Birth,
Residence Address (if applicant has resided at more than one place during last one year then all such address with dates should be
In the option mentioned), enter the full address of the applicant, according to the PAN form,
you have to write Null in the Office Address,
Previous Name (in case of change in name) in the old name of the applicant which was on his PAN card
If you are doing father’s name correction in PAN card, then you should have Previous Father Name (in case of
change in name) a new line has to be created by writing this below that table

Above Office address with location, you have to write Gaztted Officer’s Office Address in Short,
Office Seal here and get the officer’s seal signed,
(Signature) Get Gaztted Officer’s signature here,
Full Name: Enter full name,
Designation: Enter the rank in which that officer is in,
Department/Organisation/Constituency: In which department he comes from, he should enter, in
Identity card No: enter the number of Identity card issued to him by the government,
Mobile: mobile to him enter number
In this way, you have to fill the Annexure A form, then you must attach a photocopy of the identity of those Gazetted Officers with this form, then you have to mail your Agent ID or Direct UTIITSL / NSDL

How to fill Annexure A for PAN Card sample

If you are filling Annexure A form for PAN card correction, then you want to see the sample of already filled Annexure A, then you can see below, which will make it easy for you to fill and fill Annexure A form Hope that you must have got to know something after reading this article, if so, then by commenting below, you must express your views and follow the website. 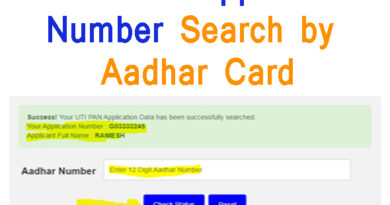 How to Register/Change Mobile Number in Canara Bank 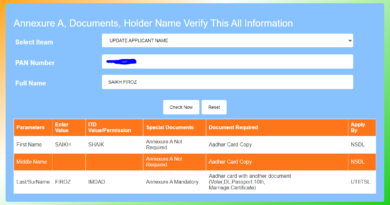